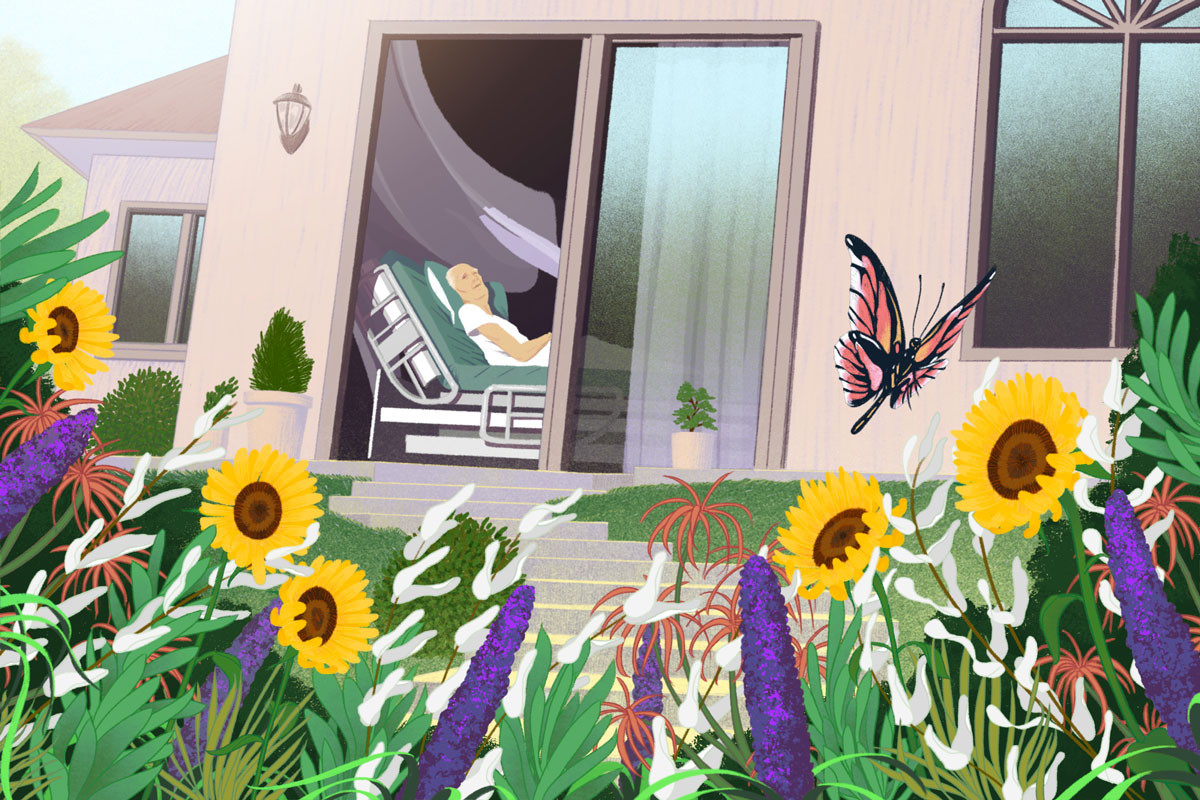 It might seem odd to talk about “innovations in dying,” but in recent decades the hospice movement has become an important new pathway for the most difficult phase of life. As American health care has become ever more high-tech and expensive, the hospice model of home-based care for terminally ill patients has enabled millions of Americans to die peacefully in their own houses, without painful medical procedures—often greatly reducing stress on both the families and the health care system.

Now, however, the hospice model is coming under stress of its own. Some of that’s because the industry has changed, with a lot more for-profit hospice agencies and investor-owned chains, which are coming under scrutiny from regulators. But much of the stress comes from shifts in how we die, how we live—and with whom. These are big demographic changes that make the original conception of hospice harder to carry out as it was once intended.

“We need to address this very quickly,” said Joan Teno of the University of Washington, a prominent geriatrician who both practices and researches end of life care. “The tsunami of frail elderly people with complex multiple illnesses is coming.”

In theory, hospice would be an ideal system to deal with this tsunami. From the time it was developed in Britain in the 1960s and ‘70s, it represented a pushback against the over-medicalization of death, emphasizing comfort care and emotional support over disruptive medical interventions. It put great emphasis on family; hospice care is often delivered by close relatives rather than medical staffers. And it was originally designed with cancer in mind, at a time when cancer killed quickly.

Families have changed since hospice took root in the U.S. health system. They tend to be smaller, and live farther apart. More women work–making it harder for them to take on traditional roles as full-time caregivers. And millions of old, frail Americans—divorced, widowed, or never married—now live alone without family nearby, or without family at all. The most isolated are sometimes called “the unbefriended.”

“We have different illnesses, and different social situations than the traditional hospice user,” said David Stevenson, an expert on aging at Vanderbilt Medical School.

No matter how good and caring the hospice team—nurses, aides, social workers and, as desired, chaplains—much of the work falls to the family. For those with less support—it can be monumentally difficult. But no less important.

“There are people who would literally rather die than leave home. And they are really left without a good option,” said Dr. Drew Rosielle of the University of Minnesota, who, like his fellow palliative care physicians, works hard to keep his patients safe at home as long as possible. “The patients who genuinely don’t have loved ones who can essentially move in with them—most of those people do not die at home.”

They end up getting care they don’t want, in a place they don’t want to be in—and it costs more. “The ER, a hospital bed or a nursing home. That is our long-term care system for people who don’t have a support system.” said Edo Banach, the new president and CEO of the National Hospice and Palliative Care Organization, who took the job knowing it’s time for some fresh thinking about hospice—and the rest of American health care.

Even strong advocates of hospice know that it’s time for changes to match the complex medical needs of today’s patients and the demographic realities of the country—as well as trends arising from long-term use of hospice in existing institutions like nursing homes. But in the near future, there aren’t a whole lot of fabulous solutions, at least not ones that don’t cost a lot of money.

This is where Washington might come in. But a comprehensive national long-term care program is so challenging economically and politically that hardly anyone in the capital even bothers talking about it.

IN SOME WAYS, hospice is a throwback to how we died before the surge of medical machinery and ICUs, and it can seem jarring that the movement would take root in contemporary America at all. When patients elect hospice, they must usually give up on curing or containing their disease—a difficult decision to make in a system that dangles the promise of a medical fix just within reach. In practice, people often turn to hospice for only a handful of days, at the very end, after using up a lot of expensive high-tech care that may have drawn out death more than it extended life.

Once they do elect hospice, a whole different philosophy of care begins. It’s more than easing physical pain and managing symptoms, though there’s that. It’s built around team-based care, both physical and emotional, and it’s intended to support the family as well as the patient.

But dying people can require companionship around the clock—and the paid hospice team isn’t there 24/7, not even close. Families—or home aides when a family can afford to hire them—fill the gap. The care is complex and intensive, not in the sense of “intensive care,” but hands-on intense.

Family support is so crucial that some hospices won’t even try to arrange home care for someone on their own; the last big survey of hospices, conducted a decade ago, found that more than one in 10 hospices refused to take on a patient without a family caregiver.

Patients who are mostly on their own may do OK for a while, but decline is inevitable. They may not be able to prepare their meals, feed themselves, get out of bed—or manage their meds. They may experience acute pain, disorientation, shortness of breath. And when that happens, instead of calling the hospice nurse, the instinct is to call 911.

Even if the hospice patient who is rushed to the hospital ends up back home, all those transitions likely made things worse. Care gets disrupted, protocols get changed, mistakes get made—and costs rise—with each handoff. “It impacts the quality of care,” said Teno, the geriatrician, who has studied care transitions extensively and who has been a medical director in nursing homes and hospice. “It’s crying out for someone to fix it.”

If the Medicare agency and Congress aren’t diving into reinvention of hospice, doctors and policy experts have some ideas of their own—though not always with clear-cut ways to pay for them. By and large, they are still in the “floating ideas” stage, not agenda items for Congress or the Medicare agency.

Some physicians interviewed suggested tiered payments, which would replace the one size fits all daily rates. In other words, they could pay more for a patient with a particularly complex condition, or for a patient who can’t stitch together the necessary social support system. Another idea is to create more flexibility on how Medicare defines “continuous care”—a higher level of care for which the hospice gets a higher rate. Right now “continuous care” means an eight-hour block of hospice-provided care. Some doctors think paying for smaller blocks, like four hours, might be more practical.

[W]e [sh]ould move toward a system where families can be supported, not exhausted. Where patients can get the holistic approach pioneered by hospice, without “giving up” on more aggressive treatment. Where patients who understand their choices can get off the conveyor belt of high-tech medicine, and find whatever balance of curative and palliative care is right for them. For both those who are surrounded by family, and the “unbefriended,” it could become a little less hard to die at home.